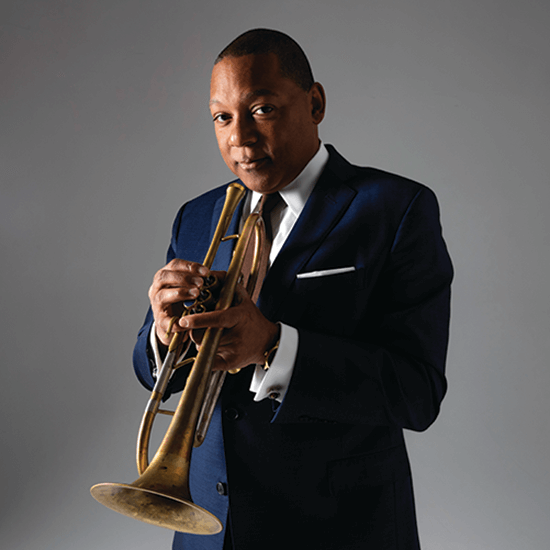 Wynton Marsalis[/caption] Nine-time Grammy winner Wynton Marsalis leads this incredible ensemble of artists playing arrangements of jazz repertoire. Best described as ‘music of jazz royalty performed by jazz royalty’, the show celebrates the legendary greats including Duke, Dizzy, Goodman and Brubeck. The band has an iconic and unique take on the jazz classics and has filled halls right across Australia, Europe and America.  Trumpet legend Wynton Marsalis is the first artist to be awarded the prestigious Pulitzer Prize in music and has recorded more than 70 albums. He’s also the first and only artist to win both classical and jazz Grammy Awards in the same year – an incredible feat he achieved two years running. Listening to Marsalis, it’s clear to see why he’s achieved such accolades. As he plays his trumpet the hall instantly fills with clear strong notes carrying emotional depth, played with a trumpet technique that overtime has become second nature. Marsalis’ music has been described by many as ‘hearing life being played out through music’.  Two incredible programs of the greatest jazz hits will fill QPAC’s Concert Hall, kicking off on the 4th of March with ‘Jazz Ambassadors’. Step back in time and listen to toe-tapping hits of the Twentieth Century, honouring acclaimed artists Duke Ellington, Dizzy (John Birks) Gillespie, Benny Goodman and Dave Brubeck.  The second show on the 6th of March, ‘Monk, Miles and More’,  allows you to experience truly exceptional artistry. Spend a night applauding the genius jazz masters, including Thelonious Monk; an American pianist and composer renown for his improvisational style; Miles Davis, one of America’s most influential trumpet players and John Coltrane an American saxophonist who pioneered ‘free’ jazz. However, while the night is about commemorating exceptional musicians and composers, it’s the talented Jazz at Lincoln Center Orchestra who weaves its own sizzling arrangements and superb original compositions for the audience.  Take the time out from your busy schedule, book a night in Brisbane and enjoy an evening of blues and swing. While it’s a night of opportunity, you can’t get much closer to the scintillating notes than in the grand Concert Hall. A night of timeless standards and red-hot hits is an evening at QPAC you won’t want to miss!

Accounting Software – which one is right for me? Ask Christine.