Uluru is more than a must-see on every traveller’s bucket list; it’s a rite of passage.  When booking a honeymoon, my initial thought was always to go overseas, but when we started to think about of all the beautiful places we have right here in Australia, we realised we wanted to see more of the country we live in.  Given we planned for a surprise wedding at our engagement party, my husband, Rob and I really wanted to do something special for our honeymoon and choose a location where we could take my wedding dress and Rob’s suit to take our bridal photos.  [caption id="attachment_15873" align="aligncenter" width="870"] 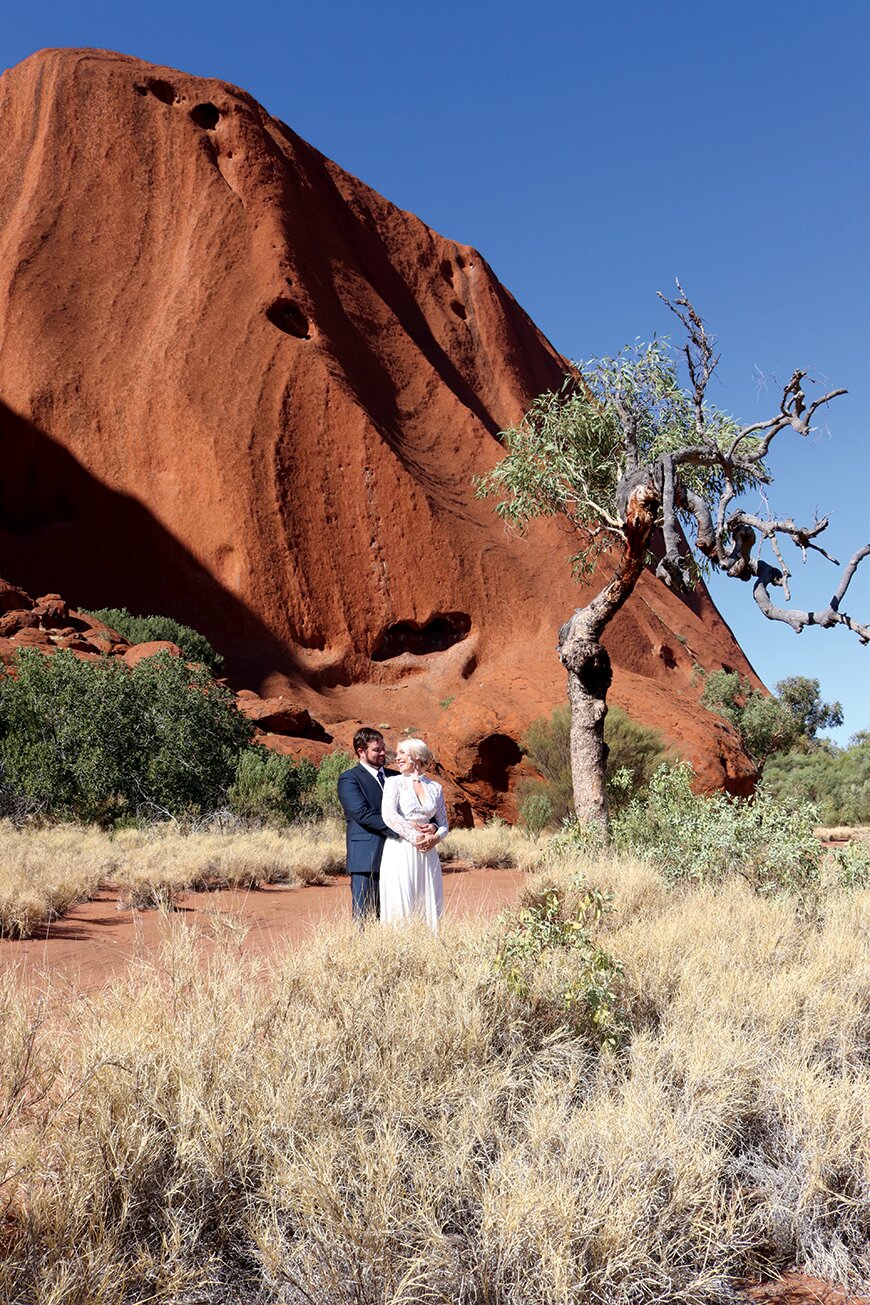 Tara with her husband Rob[/caption] I had always wanted to go to Uluru, as it seemed like such a special place to visit, and when the flights went on sale, I snapped them up – we hadn’t even locked in a date for our engagement party yet!  We flew to Uluru via Melbourne, taking a pitstop in the beautiful city to see the sights for one night, before setting off on the honeymoon. The flight to the red centre was breathtaking, and one you most definitely want to book a window seat for – with large marbled salt lakes surrounded by terracotta sand, undulating mountain ranges and burnished desert as far as the eye can see.

Coming into Uluru, I pressed against the window trying to spot it, I think I even squealed a little with excitement when I did, tugging at Rob’s arm to look out the window too. From the sky, the landscape appears so flat and Uluru just pops up out of nowhere, and in the distance you can make out the shape of Kata Tjuta (The Olgas).

I did a lot of research before going to Uluru to make sure we experienced as much as we could in the four days we were there. On our first night, we did a camel tour to the Field of Light, where a gorgeous camel, Bonnie, took us on a sunset ride through the dunes, as the guides described the native flora and fauna.  [caption id="attachment_15709" align="aligncenter" width="870"] 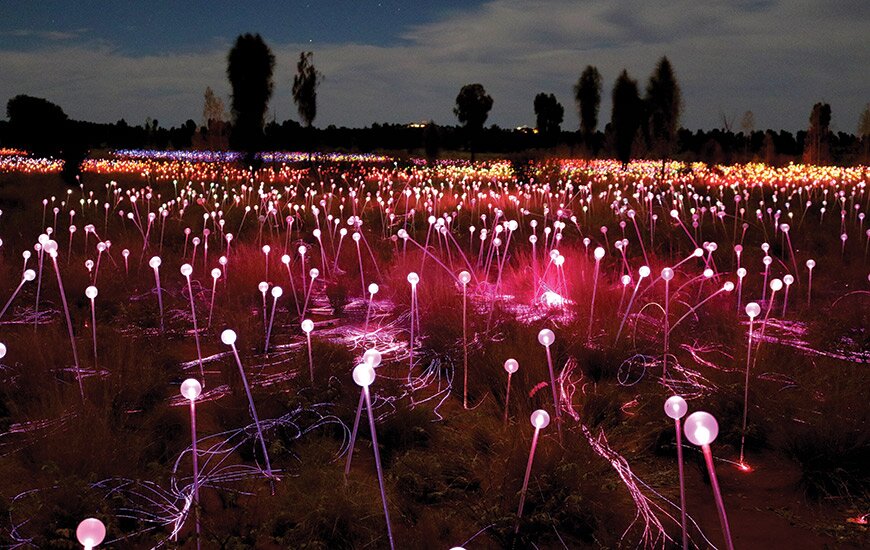 Field of light[/caption] When we arrived at a Night at Field of Light, we were greeted with sparkling wine and canapes and taken to a viewing area to watch the sky turn pink behind Uluru, before indulging in a three-course bush tucker menu with flowing beer and wine. As we dined under the stars, albeit a little cloudy, we listened to the resident star-talker tell us about the southern night sky, before we were lead through the colourful art installation of 50,000 glass spheres lit up with changing colours.  We hired a car for two days and explored the Uluru-Kata Tjuta National Park, spending three hours walking the 10km track around the base of Uluru and reading the Aboriginal stories along the way. We then headed over the Kata Tjuta and walked the one-and-a-half hours through the Valley of the Winds.  Both were simply stunning and the scenery ever-changing – the colour of the rocks shifting depending on how the light was hitting it, and despite the landscape being dry, it was still so colourful in its red and green foliage.  On our third day, we took our wedding photos in the beautiful locations we scouted out the day before, being careful to take them in the right location and respecting the spiritual sacred areas of the local people.  Having the car gave us an advantage of watching the beautiful sunrise and sunsets over Uluru and Kata Tjuta and allowed us to spend the time to really explore the area at our own pace.  For the remaining two days we took the time to relax and look around the town centre of Yulara, and took a helicopter ride over Uluru and Kata Tjuta; taking in the outback landscape from yet another perspective. While we packed a lot into our four-day trip, there are activities, accommodation and dining options for any budget. We stayed at Sails in the Desert, which is part of Voyages Ayers Rock Resort consortium of hotels, lodges and camping accommodation in the town of Yulara, located just outside of Uluru-Kata Tjuta National Park. It is 20km from Uluru and 53km from Kata Tjuta and has a bevy of restaurants and cafes in the town square, as well as a museum and galleries. There is also a free shuttle running every 15 minutes.  For those of you who don’t want to hire a car or take part in a tour to Uluru, there is a hop-on hop-off bus to get into the national park; admission into the national park is $25 for three days and there is a free guided tour at the base of Uluru every day, which goes for one-and-a-half hours. The best time of year to visit is in the cooler months, from May to September, as the temperature is comfortable during the day and the nights are crisp. But regardless of the time of year, always be prepared for the flies, as there are a lot of them! We took insect repellent, a hat and sunscreen with us everywhere and always make sure you have plenty of water on you.  So if you’re hankering for a holiday, why not visit one of our most iconic natural wonders and reconnect with Australia.  [caption id="attachment_15708" align="aligncenter" width="870"] 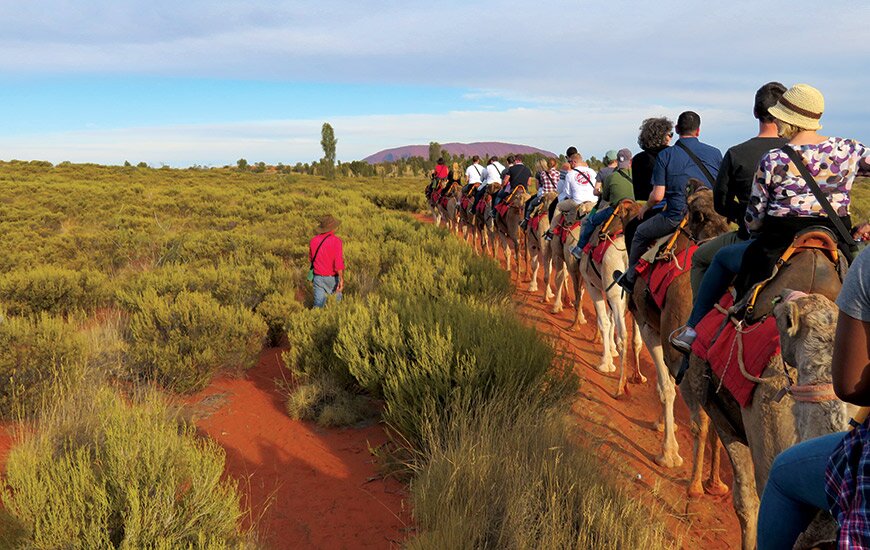 Camel ride through the dunes[/caption]

The historical significance of Uluru

Uluru, also known as Ayers Rock, is believed to have been created at the beginning of time by 10 ancestors of the Aboriginal people; it is regarded as one of the most sacred sites in Australia. For the Aboriginal people of Australia, Dreamtime represents the essence of their society, culture, traditions and spirituality. It is a time when ancestors, gods and living mortals come together to learn about the heritage and customs of the Aboriginal people.  According to Uluru Dreamtime, the world was a featureless place until the ancestors of the Anangu emerged and travelled across the land, creating features like Uluru that we see today.  Tours of Uluru allow you to see the rock paintings of the Anangu, caves, cliffs and fissures containing countless petroglyphs that tell the story of the ancestors. Certain rock outcroppings represent ancestral spirits, and the Anangu believe that by simply touching the rocks they can communicate with Dreamtime and receive blessings from their ancestors. Today, Uluru remains sacred to a number of Aboriginal tribes in the region who still perform rituals in the caves and make new rock paintings. Because of the sacred nature, there are points around Uluru that forbid photos from being taken, out of respect for the Aboriginal culture. uluru-australia.com]]>
123host August 1, 2018
previous article

What is your signature dish?